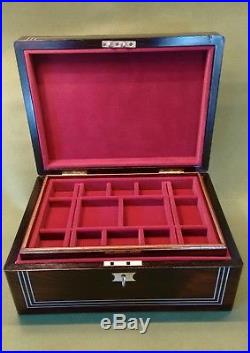 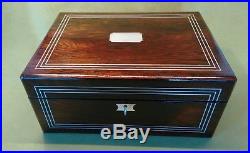 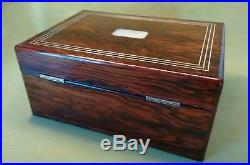 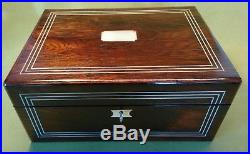 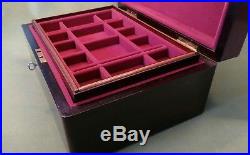 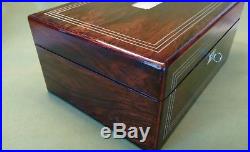 This is an English Antique Rosewood Box with mother of pearl cartouche and escutcheon and pewter stringing, circa mid-late Victorian period, which I have professionally restored and French polished using traditional methods. The interior has been lined with a luxurious, plush, burgundy material. I have also made a tray and lined it in the same material. The tray is made of American dark walnut but veneered with some antique rosewood I sourced from another box. The tray dividers can be removed and / or repositioned in order to suit the requirements for your jewellery. The underside of the box has been lined. The outside measurements of the box are approx. 12″ x 9″ x 5.5. This box comes with a working lock and key. Please bear in mind that these boxes are over 100 years old so may have age related marks. History of French Polishing. Many centuries ago wooden surfaces were enhanced and protected by having all sorts of liquids applied to them; oils, gums and waxes were probably the first substances tried, and over time, a variety of varnishes were made, to differing recipes. Shellac is a natural resin (produced during the life cycle of the lac insect), and it was discovered that this resin dissolves easily in alcohol, producing an excellent varnish. In Britain, furniture made during the 17th century was sometimes waxed directly onto the wooden surface, but high quality furniture was first sealed with shellac and then waxed. This produces a superior surface, with the wax being more regular and the patina deeper, so with furniture from this period, it is best to clean, seal and then wax. Although shellac was already known as a sealer, it was only during the early 1800s that a particular method of applying it to the surface was popularised in England; apparently coming from Europe, and the English called it’French Polishing’ although in France it is referred to as’Pad Polishing’. It should be said that there is conflicting information about the origins of the technique. But the name that has stuck; – thus French Polishing is actually the method of application, rather than the substance. Instead of applying it by brush, the shellac is polished into the surface with special pads, creating hundreds of extremely thin coats that merge or amalgamate together to form one layer. A range of finishes is possible with this method; anything from a dull matt effect, to a satin glow, and finally an extremely high mirror gloss is possible. Although an initial sealing coat of shellac can be applied prior to waxing, true French Polishing does not use wax at all, relying entirely on the skilled application of the shellac to achieve the required surface. Beware of’French polishers’ that market French Polishing as’a layer of shellac which is then covered with wax’ – this is not true French Polishing. Wax would simply obscure the surface, and should be regarded as a separate way of finishing furniture, valid in its own right. Much 19th century furniture, often made from mahogany or walnut, was French polished, and when deciding how best to restore such a piece, we need to decide if we are going to simply’conserve’ what is there, or’restore’ it to its former state. The current fashion tends to favour preserving the current surface, complete with scratches, dents and other signs of historic wear and tear, as well as old repairs. The aim is to clean and enhance the surface, so that the piece looks as if it has always been well looked after. We tend to prefer an object to honestly show its age; – even though a piece of furniture would originally have been perfect both in its smooth, blemish free surfaces and its polished finish, we now like to see the evidence of its history. So we try not to sand surfaces smooth or make unnecessary repairs, preferring simply to clean superficial grime, dirt and damaged wax off before polishing again. An interesting comparison is with old buildings like the ancient cathedrals in England; – research shows that when new, the stonework was perfectly regular and mostly covered in bright painted designs. We would probably be unhappy to see them restored to their original state, preferring to appreciate what in many respects are semi-derelict surfaces! So with furniture, we must decide to what extent we are’conserving’ what still remains, with minimal alteration, and to what extent we are’restoring’ it closer to how it would have started out. Museum quality pieces of historic importance are generally’conserved’, to the extent that missing pieces of wood are inserted for strength, but left plain, with no attempt made to stain or disguise the repair. But in the antique furniture sector, where we want strong, usable furniture, sympathetic’restoration’ is the norm, with repairs stained and worked in as carefully as possible so they become indistinct from the original. It might seem inappropriate to create a highly polished surface on something that was never intended to be that way, so 17th century oak, for example, would correctly be finished with a wax which is not a high gloss finish. Even a later piece, that may have started out bright and shiny, may now be preferred with a duller, satin glow. The restorer can make their own choice, doing what seems best to retain the character and charm of the piece. The item “English Antique Rosewood Jewellery Box Keepsake Box Collectors Box” is in sale since Monday, May 21, 2018. This item is in the category “Antiques\Woodenware\Boxes”. The seller is “antique-jewellery-box” and is located in Cheltenham. This item can be shipped to United Kingdom, Austria, Belgium, Bulgaria, Croatia, Cyprus, Czech republic, Denmark, Estonia, Finland, France, Germany, Greece, Hungary, Ireland, Italy, Latvia, Lithuania, Luxembourg, Malta, Netherlands, Poland, Portugal, Romania, Slovakia, Slovenia, Spain, Sweden, Australia, United States, Canada, Brazil, New Zealand, Israel, Hong Kong, Norway, Indonesia, Malaysia, Mexico, Singapore, South Korea, Switzerland, Chile.